Since November 2010, I am a PhD student at the Division of Automatic Control, Linköping University. I received my Master's degree (Diplom-Ingenieur) in electrical engineering with a focus on automatic control from Technische Universität Berlin, Germany. In 2009, I visited the Scottish Centre for Innovation in Spinal Cord Injury where I was working on system identification problems in rehabilitation research.

My current research is on filtering and smoothing problems in non-linear and non-Gaussian state space models. See the research page for further details, and the text below for an intuitive view.

Research on the interface between mathematics and computer code

The number of sensors in our environment is ever increasing. So is the amount of data that is collected by these sensors. It is of crucial importance for technology such as driverless cars or support robots for the elderly to make sense of such data.

The core of my research is to extract relevant information from sensor data. In the example of a driverless car this could amount to estimating its position and velocity, so as to navigate safely. By formulating a mathematical model of the car, the navigation task can be translated into a so called state estimation problem. In the example, you can describe the changing position and velocity (these make up the state) and the radar measurements in terms of equations. Interestingly, state estimation problems have the same mathematical structure for as diverse applications as health monitoring systems in hospitals and the dancing game on your game console. Even better, they allow elegant mathematical solutions for estimating the state.

Unfortunately, these elegant solutions cannot be implemented on a computer in all but a few special cases. Therefore, I work on algorithms that approximately realize the required mathematics in terms of computer code. More specifically, the main tools are so called Kalman filters which use mathematical models and probability theory to estimate an unknown state from measurements. Their development has been ongoing since the 1960s, when the Kalman filter solved a crucial problem in the Apollo mission. Still, the underlying state estimation problem remains to be fully solved, and it is research on the interface between mathematics and algorithms which facilitates future technology such as driverless cars or support robots.

In navigation we must continuously keep track of our position. Modern smartphones are equipped with several sensors such as GPS, accelerometers, or gyroscopes, which collect information that is related to our position and how it changes.

In some situations, GPS is not reliable or available at all. The unprocessed data by the remaining sensors (illustrated on the left) conveys little information about the position. The position (illustrated on the right) needs to be extracted, and this is what the state estimation algorithms that I am working on do for you. 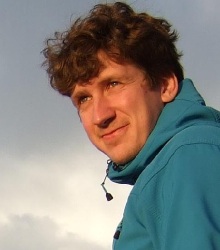 Visiting Address:
Campus Valla
Building B
Room 2A:552 (in the A corridor on the ground floor between entrance 25 and 27)